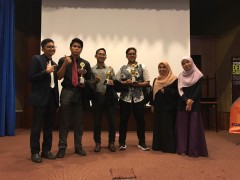 Last 2nd and 3rd March 2019, the IIUM World And Oratory Centre in collaboration with IIUM English Debate Club and Kelab Debat Bahasa Melayu UIAMK organised a competition in which a total of 2 teams per language were invited from each and every kulliyyah in IIUM Kuantan Campus to join the debating championship. A total of 8 teams of Bahasa Melayu debate and 6 teams of Asian Parliamentary English debate took part in it. This number includes 2 English debate teams and 1 Bahasa Melayu team from Kulliyyah of Medicine. Alhamdulilah the teams from Kulliyah of Medicine came up as the champions in both of the language categories. Attached is the list of participants from Kulliyyah of Medicine, the winning teams and some pictures of the event. Assoc. Prof. Dr. Samsul Bin Draman, Deputy Dean of Students’ Affairs, Kulliyyah of Medicine invited as a VIP and being accompanied by the programme manager to the Main Auditorium, Kulliyyah of Science for the final round

The Prime Minister (KOM) delivering her speech during the final round

The ‘Ketua Pembangkang”(KOM) delivering his speech during the final round of BM debate.

The team from Kulliyyah of Medicine prepping for the finals.

The KOM English Debate team receiving their trophy from the Head Of IWON, Madam Mahani Mansor.

WISH ALL OF YOU 'HAPPY EIDUL FITRI, MAAF ZAHIR & BATIN'

Tips of the Month - FAQ I Am Interested to Join IIUM