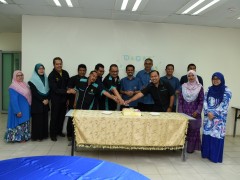 BIRTHDAY CELEBRATION FOR STAFF BORN IN JUNE, JULY AND AUGUST 2019

BIRTHDAY CELEBRATION FOR STAFF BORN IN JUNE, JULY AND AUGUST 2019

The programme started with Br. Mir Azrul giving a short speech to all the staff that celebrated their birthday after moving from Kuantan Campus to the new campus in Gambang.

As usual, those who were celebrated were given birthday presents for their birthday celebration that day. The following are names of the staff who celebrated their in birthday in June, July and August.

The Colors of Malaysia’s General Election 2022