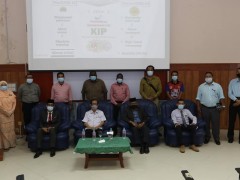 Recognising the origins of values towards achieving sustainability in education

“This is a good development because in this sustainable development, we want to rediscover the origin of how it all started, which is being balanced and in harmony with nature.

We want to go all the way back to the bottom of the road to see how the natives maintained their way of life so that it can be embedded in education, in terms of understanding what is needed to be sustainable without adding or taking the context from the outside world,” the Rector said.

Dato’ Mazlan agreed with the Rector’s philosophy in renewing the values in which the current community might have forgotten about.

“We have been talking about values in the National Education Philosophy which no one has argued about it since it was developed. This value is a universal value regardless of religion and race in which we have agreed that it is a value that we will apply in the world of education in Malaysia,” Dato’ Mazlan said.

He added that the values need to move towards progress and development of science and technology in attaining the result which will benefit the society.

“The values, which are the main pillars in education are somehow dropped out from the context and must be reapplied strongly in the pedagogy of education, in which the core must be visible in the context of how educators build education with their own mould.”

Meanwhile, according to Mr. Abdullah Mohd Yusof, the mission and vision of the institute is to create a competent educator with strong moral values which act as a transformation agent in developing the community.

“All the existing values are applied directly either in the curriculum or indirectly through programmes in the field and, among others, through the indigenous education centre of excellence in the IPG,” Abdullah said.***