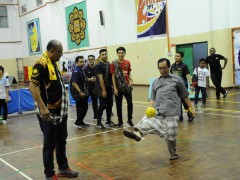 Native games with a global reach

THE International Islamic University Malaysia (IIUM) organised its first indigenous world games (i-games) at its Gombak campus last week. This was the first of its kind among Malaysian universities and possibly among universities globally. It is befitting for IIUM to initiate the i-games given that some 7,000 of its students are foreigners from 115 countries. This means celebrating an immensely rich diversity beyond the conventional cultural activities of dances and songs, in the form of recreational sports that are of indigenous significance.

What is interesting is that though some of the games are called by different names in different countries, they are essentially similar in the way they are played all over the world. This is a good reminder that what may appear different culturally could in fact be identical intrinsically in terms of values which cut across geo-political boundaries and cultures. This makes the i-games more cohesive and could bind many diverse people.

This was one of the initial “discoveries” that the organisers made when sorting through the submissions for the different games. They also found that indigenous games are almost all ecologically friendly and sustainable. By virtue of this, the games exude values of simplicity and humility as part of the attitude with which participants ought to engage one another. Unlike its modern counterparts, the i-games remain open and inclusive, and are intended for all who are interested to take part regardless of creed and colour. The i-games emphasise collaboration and focus on composure.

This enables i-games to bring back the pristine idea of what sports is all about – something that evolves from the indigenous setting of communities. It is about having “fun” and investing on building stronger relationships among humans, and between humans and nature. In other words, it is about collaboration rather than competition per se, more inclusive and participatory rather than exclusive and elitist as what modern sports have turned out to be.

This aspect becomes even more important each day as racism rears its ugly head despite the “popularity” of modern sporting events, including international football as depicted recently in Europe. Some argued that the so-called “popularity” may well be a “false” image driven mainly by advertisements and commercial interest in the name of profiteering. After all, modern sporting events are big business where corrupt practices (like doping and bribery) are clandestinely practised.

Arguably, a similar façade could be the case for electronic sports (e-sports) ‎that is taking the world by storm especially among the so-called “digital natives”. For starters, e-sports is hardly a “sport” based on the lexicon definition of the word “sports”.

Even on a cursory level, the gap is awkward and huge, what more in comparison to indigenous games. Not only are the latter more available and affordable, they are more accessible too as what sports ought to be.

The same cannot be said for e-sports. The worry is that e-sports may not give the same benefits as to be expected from conventional, more so indigenous sports, in matters usually associated with good health, attitudes, and socio-cultural benefits accrued directly (face-to-face).

In contrast, it can be mired with adverse, if fatal and deadly, consequences often unknown to the participants. A case in point was the tragedy that took place in Thailand a couple of days before the IIUM i-games.

A 17-year-old student was found slumped dead on his computer after suffering a stroke. He had spent long hours on video games at home during the holidays. Allegedly, there was a pile of “takeaway” food on his desk and a bottle of fizzy soda pop at his feet attesting to the fact he was glued to the computer.

According to his father, his son used the free time to play war games throughout the day and night. The teenager was a gaming addict. “Parents need to be strict on their children’s play hours otherwise they could end up like my son,” the father said.

It is not just the parents who must be held accountable. Policymakers and implementers too must accept responsibility. They are often the gate-keepers who should institute behavioural changes at the macro level. What happened in Thailand is not an isolated incident since e-sports, as generally understood, could be the stage required to trigger similar tragedies globally. Unless we rein in the obsession with gaming there will be regrettable consequences. In contrast, the i-games are addiction free and need to be supported.

With some four decades of experience in education, the writer believes that “another world is possible”. Comments: letters@thesundaily.com