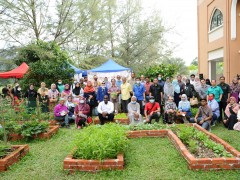 GOMBAK, 28 September 2020: The International Institute for Halal Research and Training (INHART), IIUM today launched the opening ceremony of KICT-INHART Garden which saw a Memorandum of Understanding (MoU) signed between IIUM and Seeds Malaysia, held at Kulliyyah of Information and Communication Technology (KICT).

The project, known as Integrated and Sustainable Agriculture Farming (InSAF), aims to produce a sustainable garden in which the result of the harvest will be distributed accordingly to the community besides marketing it at the farmers’ market.

According to the Rector, this project is among the biggest planting projects in IIUM, thus the rector wants it to be a productive garden in which the result can be shared with the IIUM community.

He later suggested that the result of the harvest could act as the project’s source of income by selling it to the market. This is to ensure sustainability and continuity of the project, he said.

“I would like to congratulate the organiser for bringing outside partners to collaborate in the project and I hope it can help us to learn from each other and make the garden more profitable as we move forward.”

“We would like to sustain the food sovereignty, and by doing that, we want to teach people how they can actually produce their own food by sharing the right technique,” Dr. Azura said.

“We started by teaching students from Mahallah Representative Council (MRC) and moved outside to Sekolah Kebangsaan Jalan Batu, which involves the special needs students, where plantation is part of their curriculum and there is a need for us to help them since the school is IIUM adopted school, ” she said.

According to Mr. Razak, Seeds Malaysia will not only look into natural farming processes, but also stresses concern on the sustainable practices in plantation.

“The MoU is a seal for us to collaborate in the project on a long term by aiming to help the indigenous community in Sungai Dua, Karak, where we plan to build a nursery for the community and they will be taught how to operate the nursery.”

“We will buy the final crops from the community and distribute them to the urban centre and to the locals. This initiative is not only meant for us but also to help the indigenous community in terms of education in plantation,” Razak added.***

Let's Pay Zakat Before the end of the year 2020