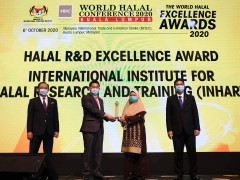 The award was received, on behalf of INHART, by its Deputy Dean, Prof. Dr. Azura Amid, from Minister of International Trade and Industry, Senator Dato’ Lim Ban Hong. She was accompanied by Chairman of HDC, Dato’ Mahmud Abbas, and its Chief Executive Officer (CEO), Mr. Hairol Ariffein Sahari.

INHART was chosen as recipient of the award for its innovation, change, unleashing of technology and ideas into the halal industry and community, including efforts and commitment in pioneering halal R&D, and the revolutionary ideas in uplifting halal through science and technology.

The coveted award also recognises INHART for its most outstanding technology developments with promising commercial potential.

A total of 12 awards were given to various sectors in small and medium enterprises, logistics, pharmaceuticals, cosmetics and personal care, franchises, central kitchens, research and development, leading brands, food and beverages as well as international business.

According to Dr. Azura, this award is an appreciation given to IIUM, and subsequently a great recognition to INHART for being the first university to receive such an award in Malaysia.

“INHART has carried out many halal research projects in science and technology and social sciences, as well as humanity. This is the advantage of INHART as a multidisciplinary centre of excellence where we have experts from multidisciplinary areas as compared to other universities.”

“We have also produced and developed various innovative products related to halal and some of them have already been commercialised, namely halal micro carrier, Bromelain, halal brome cream cheese, Fucoxanthin and Electric Nose for lard detection,” Dr. Azura said.***