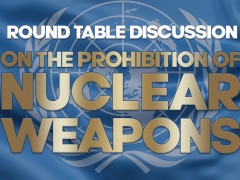 Gombak. 21 January 2021. Tan Sri Dzulkifli Abdul Razak, the Rector of IIUM commended Ahmad Ibrahim Kulliyyah of Laws (AIKOL) in supporting the efforts to prohibit nuclear weapons at the international level. He expressed the support in opening the Round Table Discussion on the Prohibition of Nuclear Weapons organised by AIKOL together with the Malaysian Red Crescent Society and supported by the Universitas Gadjah Mada and Universitas Muhammadiyah Yogyakarta.

His Excellency Hiroshi Oka, the Ambassador Extraordinary and Plenipotentiary of Japan to Malaysia reiterated in his special address on the importance of remembering the carnage created by the use of nuclear weapons and the utmost importance of planning carefully the efforts to ensure such calamity is not repeated.

The special address by His Excellency was followed by the round table discussion moderated by Prof Dr Farid Sufian Shuaib. He reminded the audience that the Treaty on the Prohibition of Nuclear Weapons will come into force on 22nd January 2021, 90 days after the deposit of the 50th instrument of ratification.

The first panelist, YBrs Tuan Hj. Hakim Bin Hj. Hamzah (Honorary Secretary General, Malaysian Red Crescent Society (MRCS)), shed light on the catastrophic consequences of using nuclear weapons and the urgent need for its prohibition. The second panelist, Professor Dr. Abdul Ghafur Hamid (AIKOL), discussed the position of nuclear weapons under international law and suggested a dynamic approach to its prohibition globally. The third panelist, Associate Professor Dr. Mohd. Hisham Mohd Kamal (AIKOL), presented the Islamic perspectives on using nuclear weapons in armed conflicts and suggested that it should be prohibited due to its indiscriminative nature on the targets, among others. The fourth panelist, Mr. Azril Mohd Amin (CEO, Centre for Human Rights Research and Advocacy (CENTHRA)), shared his experience in the NGOs in convincing States and UN bodies to consider humanitarian impact of nuclear weapons.

The occasion was graced by Her Highness Dato’ Seri DiRaja Tan Sri Tunku Puteri Intan Safinaz Binti Almarhum Sultan Abdul Halim Mu’adzam Shah, the National Chairman of the Malaysian Red Crescent Society, who emphasised the importance of working together in making the world a safer place for the future generation.