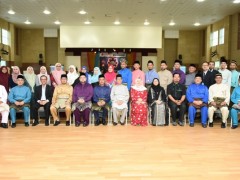 Congratulations to our Academic Staffs on their recent promotion