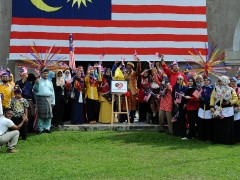 The ceremony started with the planting of trees at Mahallah Asma’ by the Deputy Rector, Student Development and Community Engagement (ODRSDCE), Assoc. Prof. Dr. Zulkifli Hasan, accompanied by Chief of Principals, Asst. Prof. Dr. Sufian Hamat, together with Principals, Fellows, Deans, Directors and staff of IIUM.

Several programmes had been conducted since the opening ceremony of IIUM Merdeka Month in August such as, IIUM Merdeka ride, sewing Jalur Gemilang flag, and Friendly Football Mall with the locals.

According to Dr. Zulkifli, the spirit of unity and working together among offices and students despite the COVID-19 pandemic is beyond his expectation. IIUM, which has championed in its spirit of unity must leverage on it in order to take IIUM to a greater height.

“We are also the champion in talent acquisition among staff and students of IIUM plus the spirit of voluntarism makes IIUM special compared to other institutions.”

Among other activities during the closing ceremony were musical performance by IIUM Staff band, a choir presentation by Principals and Fellows and Theatre by the students.***