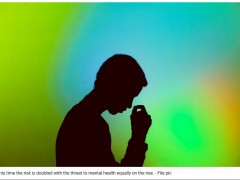 THE timely reminder from the Health director-general must be heeded by all parties. He said the nation needed unity in order to stop the Covid-19 pandemic. For the past 10 months, frontliners have been working day and night to eliminate the virus.

With noble intentions followed by relentless sincere efforts, they continue to save as many people as possible despite putting their own lives on the line. Now that the number of Covid-19 cases is up again worldwide, the pressure is mounting not only on everyone but also the frontliners in particular.

This time the risk is doubled with the threat to mental health equally on the rise. Reports of attempted suicide on the back of the lockdowns are real and cannot be ignored. Political uncertainties seem to add to the already life-threatening risks.

The American Psychological Association (APA) provides ample proof given the divisive United States presidential election that is around the corner. Its findings indicated that more than two-thirds of the US adult population agreed that the political situation was significantly adding to their stress levels compared with the 2016 election. More interestingly, it did not matter which party affiliation one belongs to.

For the Blacks, however, many more are affected by this compared
with previously. The election as a source of stress jumped from 46 per
cent in 2016 to 71 per cent this year.

The survey found that adults with a chronic condition are more likely to report the election as a stressor than those who do not have it.

Apart from that, more than three-quarters of Americans said the future of their nation was a significant source of stress.

According to APA chief executive officer Dr Arthur C. Evans Jr.: "Not only are we in the midst of a global pandemic that has killed more than 200,000 Americans, but we are also facing increasing division and hostility in the presidential election. Add to that racial turmoil in our cities, the unsteady economy and climate change that has fuelled widespread wildfires and other natural disasters.

"The result is an accumulation of stressors that are taking a physical and emotional toll on Americans."

Back home, similar concerns have been expressed. Some even suggested a suspension of all political processes and procedures as an option.

It appears to be a practical way to help health authorities avoid a catastrophe caused by Covid-19. Others called for an "emergency" to counter the infections which had spiralled to more than 25,000 cases in total and claimed more than 220 lives last week.

Allegedly, senior health officials were said to be "expressing serious concerns about the likelihood of elections during the pandemic", distracting the nation from the urgent tasks to battle it.

Experts warned of a "national health disaster" if elections were held at this time, learning from the widespread spikes in Covid-19 infections traceable to the aftermath of the Sabah election last month.

Hence, it is hoped good sense will prevail. As for the rest, APA offers some evidence-based advice on managing stress related to the political manoeuvring. Since an uncertain situation is often stressful, and some people are not good at dealing with uncertainty than others, it is better to avoid dwelling on it, especially if they are uncontainable.

Those who immediately imagine the worst will be most vulnerable when uncertainty strikes. Breaking the habit of ruminating on bad outcomes is the goal. Instead, focus on what can be kept under control. If listening to the news, following the controversies or scrolling through social media is causing stress and anxiety, then it is better to limit yourself from media exposure and consumption.

Take a break from it all, including sources of information that originate from a political area and politicians. Short of this, a political lockdown remains a strong option. Lives before votes!