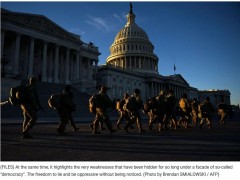 OVER the many decades, we have witnessed, after being repeatedly told, that the world would be a "better" place without despots, autocrats and tyrants on the world stage, especially so for leaders who allegedly lack the understanding of democracy.

The mantra was then translated into the "war on terror", unilaterally declared by a United States president. Leaders, mainly from the Middle East, were targeted for regime change under whatever excuses.

A classic example was the rush to dispose "Eye-raq" president Saddam Hussein. Beginning with the blatant lies shrouded under the label of "weapons of mass destruction", the international community was "informed" of the dire state of affairs with the urgent need to act, with or without agreement of world bodies, notably the United Nations.

Never mind if it violated international laws and norms under the disguise to bring about so-called peace and justice to the world (read: vested interest of the US). In a region as volatile as the Middle East, "terrorists" (some "trained in the West") purportedly create havoc and it was only right therefore to "democratise" those involved — once the ruling "dictator" was brought down with relative ease.

Indeed, successive regime changes were attempted in pursuit of a US-style democracy. There was even an Arab Spring that failed to fully blossom. Instead, it brought more hardship with further injustices under the clutch of the new regimes that were/are no less despotic.

Worse off, when the said nations were ransacked, tens of thousands of immigrants were produced as people were rendered homeless, if not lifeless. In fact, some openly expressed their wish to have their old way of life back. It may be a challenge, but arguably it was more liveable as compared with where they are pushed to.

Meanwhile, the situation deteriorated worldwide as the largest exodus of people from war-torn countries spread out over literally everywhere, seeking safe shelters. Not least in countries that used to be part of the "coalition of the willing".

As though this is not enough, an unexpected viral pandemic complicates the situation. The infection is so rapid and pervasive that no one entity is not at risk. The death toll climbs to millions worldwide, while those infected is fast breaching the hundred million mark.

At the same time, it highlights the very weaknesses that have been hidden for so long under a facade of so-called "democracy". The freedom to lie and be oppressive without being noticed.

This was most apparent under the four-year "rule" of the 45th US president, who, intentionally or otherwise, set out various scenes that culminated in the "insurrection" of the temple of the US democracy itself on Jan 6, revealing the true colours of US democracy.

Suddenly we were told by experts of the reverse, the mob that soiled the Capitol is a deadly version of domestic terror that escaped the global war on terror. And that they are more dangerous than the selective external threats that were/are sold to the world.

More shockingly, the mob has the "protection" of the then president, who incited them to attack the very seat of US democracy on the day intended to endorse the election of the 46th president.

At once, the US system is starkly shown how deeply rooted it is in systemic slavery. Various discriminatory data and statistics testify to this, backing the plea of the Blacks Lives Matter (BLM) movement.

Yet, the Capitol (mostly white) mob was mildly dealt with when they forced their way into the building in large numbers.

All these look like mere tips of the iceberg of what US democracy really is. More telling is when it has to be protected by 25,000 National Guards — a number said to be bigger than the US forces placed in some foreign lands. It goes to show how fragile the US democracy is when challenged by its own kind.

One wonders if the inauguration held last week would make much difference if the country fails to first heal itself from the "invisible" enemies within.

There can be no better analogy as depicted by another "invisible" enemy within — the coronavirus, where the mighty US is exposed naked big time.

The hypocrisy of the US democracy stands out like a sore thumb, despite supposedly being the most exemplary there is, thanks to Covid-19 and BLM.