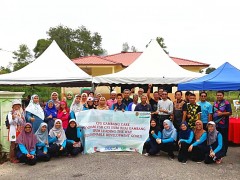 The Corporate Social Responsibility (CSR) program was successfully held at Batu 14, Jalan Kuantan Gambang, Pahang. This program was joined by 25 staff from CFS IIUM, 3 staff from JAKIM, Kuantan with more than 200 Orang Asli Community. It was conducted on 27st April 2019, Saturday from 6.00 AM -2.30 PM at Kampong Orang Asli, Batu 14. We start with Fajr prayer and then followed by brief Tazkirah. The participants from the kampong Orang Asli start to assemble at 7.30 am and had breakfast together with CFS staff. After that, there was a light stretching session led by CFS students.