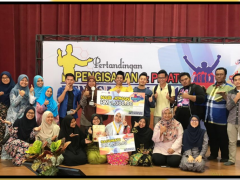 “Pertandingan Pengisahan dan Pidato Kenegaraan 2019 Peringkat Negeri Johor” was organized by Jabatan Penerangan Negeri Johor that being held at SMK (A) Pagoh, Muar on 18th of April 2019. This annual programme was held by Jabatan Penerangan Malaysia as one of the mediums to encourage people to voice out their speech while also enhancing the spirit of love towards our beloved country, Malaysia. Four of Kulliyyah of Languages and Management (KLM) students have been selected to become the representatives of Muar district for this competition. There were two categories in the competition; Pertandingan Pidato Kenegaraan and  Pertandingan Pengisahan Kenegaraan. The first was delegated by Br. Mohamad Syamsul Kamal Bin Salleh while the later was represented by Asma Lina binti Abdul Halim, Iffah Munirah binti Sabri  and Maisarah binti Mohd Aminudin. There were around six other competitors from different districts in Johor and everyone performs very well.

Hence, this competition is a success because it can boost confident level, at the same time it create more awareness among Malaysian to express their love towards the country by awesome performance of historical history of Malaysia.