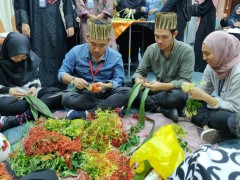 The Crafts of Nature: The Orang Asli Handicrafts

‘The Orang Asli Handicrafts’ is an event under the Arts Appreciation Series (ATAS), a monthly programme initiated by CiTRA to celebrate, explore and revive various art forms in Malaysia. This humble event was enjoined by:

The invited guests were:

Students from different departments, from Kulliyah of Islamic Revealed Knowledge and Human Sciences (KIRKHS) to Kulliyah of Engineering (KoE), had participated in this programme. The event was initiated on the 18 th of April 2018 at CiTRA’s Seminar room 2&3. The programme started off with a brief introduction of the native’s handicraft and later participants were given a hands-on demo with the guests. Participants were given the chance to personally talk with the guests to learn more about their culture and the methodology used for the handicrafts.

From sharing of folklores to the exploration of the art of weaving using coconut leaves, the event had a beautiful convergence of cultures from the participants and the guests themselves. The participants were even given materials that could only be found in particular areas (such as Bunga Panggil) to make various items. There were several crafts that the participants had learnt from the guests which were the weaving of the ‘Tikar’ (mat), the makings of 3 different kinds of ‘Tempok’(Headgear) and discovering the intricacy of making a bag that is made from an organic material called ‘lempet’.

The event ended with a wholesome lunch with the Orang Asli guests and a promise of a second meeting in the future. The programme was deemed successful and participants left equipped with new knowledge regarding the dying arts of the Orang Asli.