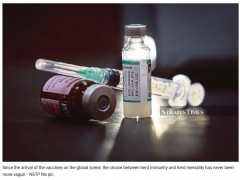 SINCE the arrival of the vaccines on the global scene, the choice between herd immunity and herd mentality has never been more vague.

Even in the US, where the pandemic rages like wildfire, resulting in the highest toll worldwide, herd immunity is nowhere yet reported.

Some Nordic countries are also attempting to press forward with herd immunity but it has been in vain thus far. In fact, the Swedish monarch reportedly is "uncomfortable" with what is happening of late.

It is understandable why certain vaccines are preferred to the extent that there is now a race to outdo one another. It is not only among the global pharmaceutical giants, but also donors, funders as well as national governments that host or collaborate with them.

The race has also spurred the move to approve emergency vaccines. In
some countries, they have no legal basis for this, yet in all cases to
date, the use of vaccines is legitimised in the same way to allow an
early administration of the vaccines to less than a year.

The usual period ranges from five to 10 years. The move is therefore unprecedented. Be that as it may, there is a well orchestrated attempt to instil confidence that the vaccines approved thus far under emergency use are "safe" and even "effective" or "efficacious".

However, over a very short period of time, it is clear that these terms are only relative. What is safe to one may not be so safe to another, based on the differences of the cohort tested. So is effectiveness as demonstrated by the new variants in some parts of the world like South Africa with reference to one type that is approved for emergency use.

As vaccine use spreads far and wide, many more aspects can be learnt, especially on the long term effects on the more vulnerable groups.

This has happened, resulting in the relevant health authorities issuing advisories and cautions to the susceptible worldwide.

This is not unusual because of the long-term and very large samples involved. The universal rule of thumb applies: the benefits must outweigh the harm. Meaning, one vaccine can be more "acceptable" to another based on its distinct profile as a medicinal entity to remedy or prevent the same (ill-) health conditions.

As an analogy, the same headache can be cured or relieved by a variety of painkillers with different rates of relief or experience to different individuals.

That is, there is room for preference based on scientific information and evidence openly declared to those who need to make an informed decision.

What's more, if no one is liable for the decision made on his/her behalf. Therein lies the dilemma when choosing the available vaccines.

If the first vaccine is from company A, then the issue of choice is irrelevant. There is no alternative readily available at the moment of implementation. In a sense, it is a monopoly for the company despite being no t the most convenient, logistically speaking in the context of storage and frequency of use.

The case comes to a head when company B comes into the picture with a more convenient single-dose use and storage more compliant with the tropical climate.

What if it is more effective and shows better efficacy? So why should anyone be deprived of product B, or other products that may come in slightly later?

Also, which one is more appropriate, not just better but more affordable too? In short, accessibility alone in the context of what is conveniently available is not a sufficient reason to choose without resorting to the "scientific evidence" that underlines it.

Worst is if what is convenient is tainted with non-scientific factors, especially politics and/or economics.

The risk of mixing them with medicinal considerations is already well-established where healthcare can be compromised and undermined.

Transparency and openness are, therefore, crucial across the board with comparative data analysis made freely accessible in order to hinder herd mentality in the attempt to expedite herd immunity.