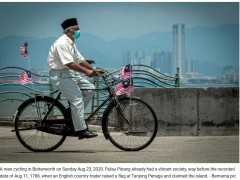 The Merdeka of Pulau Pinang

I'm returning to a familiar theme, much written, in modern Malaysia, especially over the last two decades. Revisiting the history of the earliest communities, who inhabited the island of and off Kedah before 1786, remains an imperative role for the writing of Malaysian history.

It must be remembered and be reminded that the history of Pulau Pinang did not start from 1786. The rewriting of the nation's history must revisit, rewrite and decolonise that narrative.

The island was believed and judged to be terra nullius (uninhabited). This is the template constructing the history of Malaysia also — from the early 1800s colonial courts, to school textbooks to public history.

Pulau Pinang is, of course, not alone. Parallels are seen with the history and historiography of Singapura.

Circumstances are different. Yet, Pulau Pinang is as history starved as her counterpart down south. I have used the term "pengemis sejarah" (beggars of history) in my earlier writings on the history of the island. Tales from East India Company (EIC) and Colonial Office records were the mantra. C.M. Turnbull's story

of Singapore 1819-1975, had framed Singapore's history as a positive outcome of British colonialism.

To accept that template as a fact of history itself falsifies the past. To be sure there are many roads to the past. The historical narrative is also an argument. Colonial archives are certainly biased. So are our historians, custodians of heritage and policymakers.

Colonialism is never benign. What happened in 1786, is what can be termed the conquest of Pulau Pinang. There was no treaty. The colonial past does not preclude what tantamounts to criminality. But Light did not commit murder. Stamford Raffles did. The likes of the Raffles massacre in Palembang and Banjarmasin Affair involve the criminality of the colonial state.

On the former, a letter from Raffles for the extermination of the Dutch reads, "...buang habiskan sekali-kali segala Belanda dan Residentnya... Jangan kasi tinggal lagi (...must throw away, finish entirely all the Dutch people and their Residents... Do not allow them to stay)".

We have not "buang habiskan" that narrative. We are civil, not vandals, like the Germanic tribe of that name who once roamed and plundered (vandalised) Europe in the fourth and fifth centuries.

Pulau Pinang already had a port, and a vibrant society, way before the recorded date of Aug 11, 1786, when an English country trader raised a flag at Tanjong Penaga and claimed the island by renaming it George Town, replacing Tanjong Penaga (the site at Padang Kota Lama), and Prince of Wales Island (somewhat stillborn) to replace the name Pulau Pinang.

Some 20 years later, after the implementation of the so-called Charter of Justice 1807, the Pulau Pinang courts held that in order to provide justice to the natives of the state, the lex loci of Penang should be the English Common Law and the rules of Equity applicable in England.

On the contrary, the Sultan of Kedah, Sultan Abdullah Mukarram Shah, claimed that he was merely allowing the British to occupy a part of the island while taking care of the sultan and his kingdom against his enemies, especially Siam. To the sultan, Pulau Pinang was never given away to the British.

These were also retold in a paper titled Lifting the Veils: The Mystique (Mistake) of Penang Legal History, at Seminar Ahmad Ibrahim in 2007. The paper raised the problem of legal historical discrepancies surrounding the British occupation of Pulau Pinang with a plethora of questions.

It has always been claimed that the legal history of Malaysia, in general and Pulau Pinang, specifically, begins with the occupation of the British of the island in 1786 and the three Charters of Justice: 1807, 1826 and 1855.

The authors cited legal scholar, the late Professor Ahmad Ibrahim, who said that this has to change — that Pulau Pinang legal history did not begin from 1786. There was a legal system in existence on the island prior to 1786, observed from the way of life of the local inhabitants.

The application of Islamic Law modified by Adat Temenggong could be seen in the law of marriages and divorce, the payment of tax, law of property, transaction, types of offences, either in civil and criminal, maritime rules, the sultanate kingdom and the administration of society.

The Islamic law modified by Adat Temenggong should have been the lex loci of Pulau Pinang. Merdeka. But, whose past, unapologetically distorted; and whose legal history?

THE ARABIC DEBATE TEAM STRIKE BACK!!