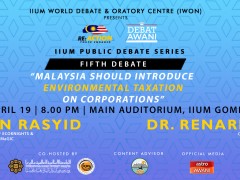 This was the fifth session of the “Re:Action – Youth Engaged” IIUM Public Debate Series. The debate took place at the Main Auditorium on 24th April 2019 which was  broadcasted on 28th April at 5:30 p.m. on Astro Awani Channel 501. The debate is also uploaded on Astro’s youtube channel and astro website for viewers. The debate was also aired on the IIUM Facebook Live.

The motion for the debate was that “Malaysia should introduce environmental taxation on corporations.” The debate featured, as main speakers, Yasmin Rasyid, Founder and President of Ecoknights, on the proposition side and Dr. Renard Siew, Climate Reality Leader of Climate Reality Project on the opposition side. The two youth speakers for proposition and opposition side were respectively, Jasmin Irisha, Former Manager of Malaysian Youth Delegation (UN-MGCY) and Naveenjeet Singh, 11th Best Speaker of Asia from Taylor’s University. Mr. Malik Ridhwan, formerly from Astro Awani, moderated the event.

Congratulations to the KOP recipients of FRGS 2022