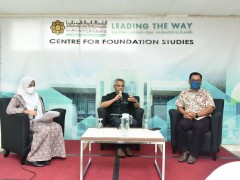 During the event, the Honorable President had also officially launched the 2022 Book Review Competition that is open to all CFS students. The President’s visit to the Centre continued after Zuhr prayer with a special session with student leaders that lasted for about 1 hour. Following that, he spent the evening at Mahallah Al Biruni for a futsal match against the students. It was a meaningful moment as the students were able to interact casually with the President during throughout the match.