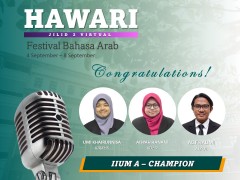 IIUM World Debate and Oratory Centre would like to Congratulate to IIUM A from Arabic Debate Club for being the Champion of HAWARI Competition that was held on 7th September 2021. During the competition, IIUM A won over SPBA UIN JOGJA in final.

"Success is the fruit of good ideas pursued with energy, intelligence, and determination." No wonder the team did very well in the competition!

Thank you for making IIUM & ADC proud of you! See you & others in the next competition.