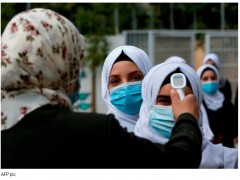 THE impact of the "First Wave" of the coronavirus on education was a lockdown in almost every part of the globe, causing anxieties that might turn into mental disruptions with a long-lasting impact.

Even as schools and universities are starting to reopen, they do so under the looming spectre of the next wave of the Covid-19 pandemic.

The Second Wave seems to be more complex, bearing down on the vestiges of the lockdown mentality. This arises from the fact that students were not able to take examinations and their grades have to be calculated on the basis of teachers' estimates.

These comprise a statistical model based on past results at the school and the student's prior attainment.

Reportedly, "nearly 40 per cent of A-level grades submitted by teachers are set to be downgraded when exam results in England are published next week", according to the UK's Guardian recently.

That is "nearly 300,000 A-levels issued lower than the teacher assessment of the more than 730,000 A-level entries in England this summer".

This has already caused an uproar as it did in Scotland, when the exams authority rejected nearly 124,000 grade recommendations from teachers.

Moreover, allegedly, unlike their Scottish counterparts, "English pupils are barred from appealing against their results on academic grounds".

It is, therefore, feared that many will be affected, especially those with borderline grades.

To the Royal Statistical Society, however, the problem may reside elsewhere when it called for an urgent review of the statistical procedures used in England and Scotland.

This is directed to "issues of the data used and the adjustment algorithms of the various nations, but also whether greater transparency would have been possible and beneficial".

Still, some parents are contemplating legal recourse due to the uncertainty of how the grades will be determined.

Many of them are concerned that "the process will be inherently unfair", and that the students are "at risk of being marked down through no fault of their own", especially if no appeal is allowed.

Hence, schools in the United Kingdom fear a backlash over the "unfair" A-level exam results, claiming that there isa"moral imperative" to address injustices that may occur.

In particular, the focus is on the impact on disadvantaged students at poor-performing or improving public schools.

Some are even expecting to be marked down simply because of their poor results in the previous exams. Worse, when it is framed on the performance of students at the respective schools, which allegedly is "in no way representative of an individual's ability to do well".

Ultimately, what is at stake is the social mobility that education is supposed to address as "the leveller of society".

Educational champions on social mobility, like the Sutton Trust, highlighted that there should be a balance between fairness and practicality in order to mitigate the situation.

It pointed out that this is an exceptional year, so universities should consider the unusual circumstances that students are exposed to.

That said, news across the Atlantic gives another unexpected impression.

Reportedly, Harvard University for example, faced an increase to about 20 per cent in incoming students who chose to defer their studies due to the pandemic.

In normal times, students do so to travel, volunteer, or get a job to make up a gap year.

This time, there are some uncertainties given the unabated outbreak, especially in the United States. As a result, some students are contemplating micro-credentialing courses in languages, or learning to sing or cook.

At the Massachusetts Institute of Technology, the deferment is said to be lower, around only eight per cent of first-year students although it is still an increase from the normal one per cent. The trend seems to be the same in many other institutions.

f Harvard's student population will be living on campus, with more undergraduates staying away and learning remotely.

Earlier, the university said it anticipated bringing back 40 per cent of its undergraduates to campus, including all first-year students, but this was not to be.

What is clear is that Covid-19 will continue to disrupt and cause more and more uncertainties that were never imagined.

How the Third Wave looks like is anybody's guess. Much will depend on how we deal with the Second Wave.

Workshop on IREP, copyright and Huris