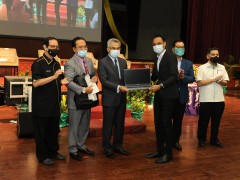 GOMBAK, 6 October 2020: A total of 15 students from B40 group received laptops from IIUM through IIUM Alumni Association to assist them in their studies at the university.

The presentation of the laptops was intended to assist students from B40 group who are facing financial difficulties in continuing their studies for the new semester which begins right after the Ta’aruf Week.

The students were chosen based on the list of names received during the movement control order (MCO) period. The selection process covered various aspects which included parent’s household income, and priority is given to students who do not own any laptop or the laptop is damaged.

Meanwhile, IIUM received around 3,500 students for its new intake which included both direct intake and from IIUM’s Centre for Foundation Studies (CFSIIUM).

All students have registered for their Mahallah (hostel) and collected their Ta’aruf kits for the Ta’aruf Week, from 29 September until 4 October, by following all the standard operating procedures (SOPs) set by the government to avoid any inconveniences during registration session.***

Preservation of life must come first

THE ARABIC DEBATE TEAM STRIKE BACK!!