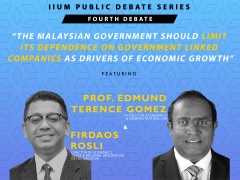 "Re:Action - Youth Engaged", IIUM Public Debate Series is organizing its fourth public debate on Friday next week 1st March 2019. Do come and watch Mr Firdaos Rosli, who assisted the Deputy Minister of MITI as the Senior Private Secretary since 2008, going against Prof. Edmund Terence Gomez, who also recently published a book titled “Minister of Finance Incorporated: Ownership and Control of Corporate Malaysia”, in a public debate live at our own main auditorium.

If you are not on campus, you can tune in and watch it live through YB Syed Saddiq's (@syedsaddiq) facebook live feed. Also, this debate will be broadcasted on ASTRO Awani (CH 501) later on 3rd March.