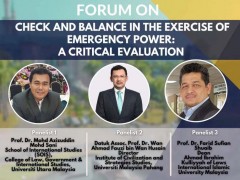 Gombak, 8 August 2021. It is imperative that check and balance is in place in the exercise of the expansive and generous emergency power. Emergency which calls for drastic actions does not necessary means that the principle of limited government is excluded altogether. To the contrary, it is more pressing for the mechanism of check and balance to be unfolded during emergency considering the extra ordinary power provided to the federal government during emergency.

This is the observation in the round table discussion on check and balance in the exercise of emergency power organised by the Constitution, Administration, Good Governance, Integrity & Human Rights Research Cluster (CANGGIH) of Ahmad Ibrahim Kulliyyah of Laws, International Islamic University Malaysia which is led by Prof Dr Nik Ahmad Kamal Nik Mahmod. The event was moderated by Assoc Prof Dr Khairil Azmin Mokhtar.

According to the first panellist, Prof Farid Sufian Shuaib, emergency situation is accommodated by relaxing some constitutional structure and suspending parts of the constitution. However, the constitution requires continuous respect to rule of law while providing the tools for necessary drastic actions. Since the government at the federal level is given power to promulgate and enact laws contrary to the constitution, even taking over state government, it is necessary to appreciate the significant of check and balance over such expansive power.

For Prof Mohd Azizuddin Mohd Sani while it was worrying for the government to reintroduce provisions similar to the law against fake news under the emergency ordinance, he did not find any instances where the government could be said of using the law to trample dissent. Nevertheless, as a political scientist, he highlighted that many commentators characterised the decisions from the cabinet on the proclamation of emergency from the early years of the independence of Malaysia as political. He also took exception to the suspension of the Parliament which could provide the much needed check and balance during emergency.

It is pertinent, according to Assoc Prof Dato Dr Wan Ahmad Fauzi Wan Husain that the Yang di-Pertuan Agong plays the role as the Head of State to check on the decision and action of the government during emergency. The absence of check and balance will increase the possibility of erroneous decisions which will bring calamities to the nation. Dato Dr Wan Ahmad Fauzi invited participants to look beyond the letters of the constitution and to consider the rich indigenous content of the practice of the Sultanates that constituted the federation of Malaya and later Malaysia to better inform the interpretation of the Federal Constitution.

The panellists agreed that in discussing check and balance, the discourse should not confine only to the principle of constitutional monarchy. The other principles imbued in the Federal Constitution should also be considered such as constitutional democracy, parliamentary democracy and deliberative democracy. In this regard, the responsibility and the right to exercise check and balance is not only confined to the constituent of the three organs of government namely the executive, legislature and judiciary, but also to the people through the mainstream media and the internet including the social media.