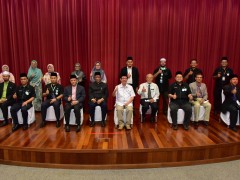 This baby-friendly hospital project highlights the miracle of breast milk, especially for premature babies who are easily exposed to the risk of intestional inflammation or necotising enterocolitis (NEC) which could become worse if they are given formula milk.

Therefore, SASMEC @ IIUM has come up with a new initiative to establish a milk centre called the Halimatussadia Mother’s Milk Centre, where its name is given after Prophet Muhamad S.A.W.’s wet-nurse.

To emphasise the importance of meeting the requirements of Islamic law to prevent the occurrence of mixing lineage and overlapping milk mahram, the Medical Centre’s officials have had discussions with Sahibus Samahah Dato’ Sri Dr. Haji Abdul Rahman Haji Osman, who is the Mufti of Pahang, the Pahang Islamic Religious Council and Malay Custom (MUIP) and other agencies including representatives from the Ministry of Health (MOH) and Pahang Health Centre.

According to IIUM Rector, Prof. Emeritus Tan Sri Dato’ Dzulkifli Abdul Razak, the Centre had come up with the right initiative to assist Malaysians in addressing the concerns of health of infants and children.

He said,”With the existence of the Halimatussadia Mother’s Milk Centre, it will play a role in preserving the health of premature babies who are short of breast milk and avoid the use of formula milk.”

Meanwhile, according to head of baby-friendly hospital initiative project, Assoc. Prof. Dato’ Dr. Hamizah Ismail, SASMEC @ IIUM, which is also the 29th flagship project of IIUM, aspires to conduct this project because the hospital has sufficient facilities and expertise, making it a necessity to establish this centre.

“I hope with this initiative, we can establish a baby milk centre that meets the Maqasid Shariah and halal standards, as well as providing only the best for our future generation and also to the premature babies in Malaysia,” she said. ***