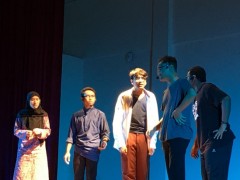 The atmosphere of the venue during the play that was staged on 7th February at Khawarizmi Hall, CFS IIUM was euphoric at the same time melancholic given the shifting of scenes, interesting storyline, and also unexpected plot twists at the end of the musical theatre play.

RANCANG Karya Liyana Hasan “Bukan Nyata” is a story about how a person will go beyond the limits to do anything and everything for the sake of love. An exuberant support from the students and CFS IIUM community made the musical theatre a success. The main purpose of this play is to raise funds for an orphanage house and as an entertainment for the students.

The musical theatre also was the first-ever theatre staged at IIUM Gambang Campus and marking to be the stepping stone to more upcoming theatres in the future.