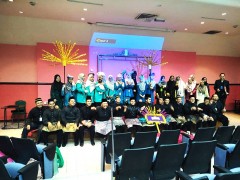 Mahallah Award 2018 was successfully held on 20 June 2019. The idea of this award is to celebrate and appreciate students as well as staff’s contributions and achievements in the university’s curriculum throughout the year. Students, principles, mahallah fellows and administrative staff of IIUM were all gathered to commemorate the annual event, the very day they were credited and awarded for their hard work, contributions and determination they put into their jobs.

The five shortlisted Mahallahs competing for the Mahallah Award 2018 were Mahallah Aminah, Mahallah Asiah, Mahallah Sumayyah, Mahallah Bilal and the only Mahallah from Kuantan Campus which is Mahallah Fatimah Az-Zahra.  A new concept was introduced in a form of presentation in celebrating the students' accomplishments. They had to undergo several steps before reaching the final stage in determining which Mahallah deserves to be honoured as the best IIUM Mahallah for the year 2018, in which they had to present their Mahallah achievements and programs throughout the year.

Last but not least, it is hoped that in future, students will be more spirited and energetic to participate in university’s activities not just in terms of achievements but also as a form of training in cultivating good virtues and holistic personalities as well. Furthermore, we hope it helps to strengthen the relationship, ukhuwwah, and nurture the spirit of brotherhood among all parties involved such as students, principles, mahallah fellows and the administrative staff. Most importantly, we hope it will develop the spirit of sharing and cooperation among the residents in assisting the mahallah management in introducing and maintaining the Sustainable Development Goals (SDGs) set by the United Nations General Assembly in 2015.