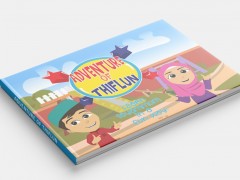 The symposium commemorates the gathering of local HCI academicians and practitioners in Malaysia in finding out how HCI can contribute and make an impact in the landscape of Malaysia’s ICT and digital transformation.

The competition was held through online medium, with a submission of posters on their projects and a virtual presentation with selected juries.

The first gold medal won by Nor Bedriah, Nur Laila Husna and Ami Dilaperuri was for their success in creating a healthcare queuing scanner application called iSihhah.

Meanwhile, the second gold medal won by Khalida Sofea Khairuddin, Zaiton Ahmad Maideen and Zahrina Mustafah was for their success in creating a learning based game called “The Adventure of Thiflun” which is designed for KAFA teachers in guiding the students to learn tayammum.

Md Farhad Hossain managed to grab a silver medal for the Unified Neuro- Affective Classification Tool (UNACT) which is a brain signal analysis tool that is based on the emotional electroencephalography (EEG) data.

The students were mentored by Dr. Madihah Sheikh Abdul Aziz for iSihhah and “The Adventure of Thiflun”, while Dr. Hamwira Sakti Yaacob mentored the UNACT project.

According to Dr. Hamwira, the projects were the students’ Final Year Project which they have been working for over two semesters.

Meanwhile, Dr. Madihah said the students managed to incorporate all their learnings in class into the projects they developed since it is part of the students’ class projects and they were able to test the products with the target users.

“The achievements could motivate other students to be creative and innovative and this could become a milestone for them to join such competition and bring up their ideas to the eyes of Malaysians and the world,” Dr. Madihah said.

“This is a great exposure for both KICT students and lecturers involved. The products can benefit the IIUM community as well as society at large,” she added.***

​Free Market - Back To School Programme