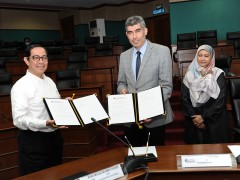 GOMBAK, 6 August 2020: The International Islamic University Malaysia (IIUM) ties a knot with the International Educational, Scientific and Cultural Organisation (IESCO) with the signing of a Letter of Intent and the launching of IIUM-IESCO sponsorship project to benefit some 50 Rohingya students.

According to IIUM Rector, this is an ambitious project for the university in which the idea is to lay another foundation for unfortunate immigrants mainly the Rohingya community in Gombak. He said, “This is the right junction to give justice to the community through education.”

“Many of the Rohingya go to school but they don’t have an ending, they finish with exams and sometimes they can’t even find jobs, so we are trying something different in the sense that they will compete with other undergraduates.

This is the starting point, where we have planned to adopt more schools in rural areas, and with cooperation of NGOs, the community will be secured and get a better life.”

The Rector thanked IESCO for giving IIUM the trust in handling this project and the university will come out with sets of strategies to further help the Rohingya community.

He commended the Rohingya Education Centre (REC) Gombak for being among the education centres that will be adopted by IIUM to ensure the school is well preserved.

“IIUM can help to nurture the students who eventually will enter IIUM as our undergraduate students,” the Rector added.

Meanwhile, the CEO of IESCO said that it is essential to build a strong relationship with a university which will lead to more development programmes in enhancing the quality of education and research in the Muslim world, especially among the unfortunate communities like the Rohingya, the Palestinians and others.

“We have started the project today with the amount of RM230,000 and soon we are expecting to implement more projects with them,” the CEO said.

“We are hoping to reach the safe side and secure our graduates and students and provide them with good education,” he added.***