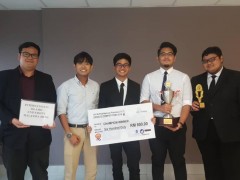 Kulliyyah of Pharmacy would like to congratulate our students for emerging as the Champion of the 5th MyPSA National Pharmacy Debate Competition (NPDC) 2018, which held on 5th until 7th October 2018 at MAHSA University Bandar Saujana Putra Campus. These 3-days programme is an annual event held by one of the pharmacy schools in Malaysia in collaboration with Malaysian Pharmacy Students' Association.