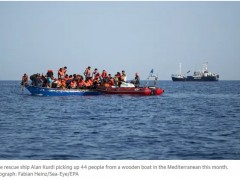 Heed call not to stigmatise migrants

THE health director-general’s statement not to criticise migrants, who are allegedly infected by Covid-19, says it all. In other words, do not stigmatise them as carriers of the deadly disease. Many citizens are quick to do so because they cannot identify with the migrants. While some are stateless, others are considered illegal.

Some of us have forgotten that the migrants are humans too, and their exposure to the virus is not entirely their fault.

What can we expect when many of them are forced to live in crowded dingy places. This too was highlighted by the DG more recently as a way to empathise with them. However this is not a new plight plaguing society.

In earlier times, when diseases like leprosy were rampant, and no cure was available, the sufferers were treated literally as “outcasts”.

We have seen movies as to how those infected were shunned. Some were chased away and pelted with stones. They were not only physically, but also socially distanced.

What is the difference? The former emphasises the concern over risk of infection when in close contact with a carrier of the disease.

In the case of the coronavirus, it ranges from physical measures of one to two metres depending in which country you are.

Social distancing, however, does not warrant any physical measures at all. It refers more to the state (or lack) of solidarity or bonding socially speaking.

For example, in the science-fiction novel, The Naked Sun, Isaac Asimov writes about a sparsely-populated world where people are spread out kilometres from each other, yet they are socially close and connected.

Like today, communication is primarily through technology. But it has serious social problems like immodesty and murder which gives the impression of social distancing of sorts in their seemingly idyllic world.

In fact, social distancing can be traced as far back to at least the fifth century AD. The biblical version reportedly contains one of the earliest known references to the practice with respect to people with leperosy “in whom the plague is”. The sufferers “shall dwell alone”. And during the Plague of Justinian (AD541 to 542), emperor Justinian was recorded as having to enforce an ineffective quarantine on the Byzantine Empire. This included the dumping of bodies into the sea.

All these is said to come under the ambit of the notion of social distancing. It can also be discriminative and xenophobic where certain groups of people were blamed to spread the pandemic, just like how the migrants are targeted today. Then they could be the heretics, witches, or just the “other” like Asians who were rolled into one category in the case of the Covid-19 outbreak.

Hence, to say something to cause “hatred” that the DG advised against could be also construed as social distancing in the same sense. That is, it is capable of undermining social solidarity and bonding, which is vital in the fight against the pandemic.

In the case of Covid-19, such an outcome could be detrimental because in the attempt to break the transmission, every individual must work in tandem (read in solidarity).

It only takes one person to socially distance himself or herself from the rest to render the effort vulnerable. On the contrary, not to maintain a safe physical distance can also bring about similar threats.

It is obvious therefore that social distancing is not exactly physical distancing, and they are not interchangeable as it is made to sound.

To be more effective, physical distancing ought to be matched by social solidarity collectively. Otherwise, the former remains equally vulnerable as we witnessed in several cases where people tend to gather causing unwarranted overcrowding, and prolonging the outbreak further.

Another piece of good evidence to show the difference is in terms of mental health. Social distancing (read loneliness, isolation, outcast) has been shown to adversely affect mental health.

It may lead to panic, stress, anxiety or even depression. Especially for those who have pre-existing conditions such as emotional instability, paranoia and obsessive compulsive disorders.

Widespread media coverage about a pandemic, its impact on livelihoods, and the resulting hardship may worsen the situation.

Fake news and misinformation are often implicated as well. Change in daily habits, living circumstances and uncertainty about the future over a prolonged time are likely to increase the mental stress of being disconnected from the community socially.

All these subtle, yet important differences are often ignored leading to confusion as to how best to handle the virus.

Meaning to say unless we are able to seriously decouple physical and social distancing as argued, many like the migrants will lose their dignity due to our own ignorance, if not arrogance.

The writer is rector of International Islamic University Malaysia