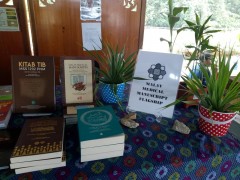 The purpose of the booth was to create awareness about the value of Malay Medical Manuscripts (MMM) among the visitors. Explanation from personnel have opened some of the visitors on the importance to study the manuscripts which is one of the main objectives of this flagship.

Among activities at the booth was rearranging words written in old "Jawi" which was proven to be challenging. There was also crossword puzzles pertaining to MMM for the crowd to test their Malay history knowledge. Several books on MMM were sold at the booth and some were written by the flagship leader. The exhibited medicinal plants also managed to grab the attention of the crowd.

In short, the event managed to attract a large crowd into IIUM and that made the booth reach its target to create awareness among the visitors.

Why don't you challenge your "Jawi" knowledge by trying to rearrange these words into two sound sentences?