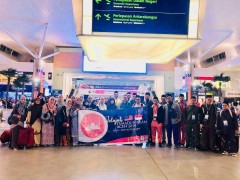 The purpose of the trip is to appreciate and partake in an effort to conserve, preserve and embrace cultural heritage of islamic Aceh Sultanate relics by involving in a historical discovery alongside the Acehnese non-government organisation that concerns with islamic historical civilization. Three academia from the campus, made up of college principal, program advisor and fellow were also involved in the remarkable 4 day volunteering trip to the northwest Indonesia Province of Sumatra Island.

On the day of the arrival, the program kick-started with an intellectual discourse titled Seminar Dakwah and Tamadun Aceh-Pahang which took place at Aula Fakultas Adab dan Humaniora, UIN Ar-Raniry. Among the panel of speakers who were involved in the discussion, Drs Nurdin and Dr Manan, academia from the university itself and Dr Mohd Affendi from IIUM Kuantan Campus.

The volunteering participants then made their way to Kampung Ulee Tuy, Darul Imarah Bandar Aceh where tombstones believed belonging to the rulers during the era of Menteri Penghulu Fawas Maharaja Setia were situated. Here, the volunteers involved in a cleaning and excavating activity to search for missing tombstones that were buried in the village vicinity. The participants managed to experience the process of unearthing and conserving the ancient gravestones which have been presumably existed ever since the 16th century of the Aceh Sultanate.