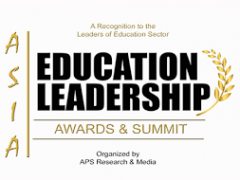 Director (Administration), Centre for Foundation Studies, International Islamic University Malaysia (IIUM) Tn. Hj. Mir Azrul Shaharudin has become the first Malaysian administrator from a Malaysian public university to be awarded at the 10th Asia’s Education Excellence Awards organised by CMO Asia. The ceremony was held on August 16th in Pan Pacific Hotel, Singapore. The ceremony was attended by participants from 47 countries. CMO Asia is a leadership and networking organisation dedicated to knowledge exchange for senior executives across industries.

The award recipients were selected based on intense research. The research cell consists of Post Graduates in History & Management with over 5 years’ research experience and post studies. It was the iconic job of the research cell to produce a shortlist of individuals who are doing extraordinary work and track the record of their achievement.

The shortlist is then reviewed by a Jury comprising of senior leaders, researchers and prominent names of senior professionals and academicians from across the globe based on these judging criterias: Strategic Perspective, Future Orientation, Track Record, Compliance, Integrity and Ethics, Ability to foster Sustainability and Marketing Competencies. The award recognized particular contributions by an individual who has made a difference to the profession, industry and the community at large.

“I am quite shocked to be selected for this award especially upon knowing that past winners were academicians. It is an honour to receive this award from such an esteemed organisation as CMO Asia and to stand together with the other inspiring leaders in Asia,” Mir Azrul says.

“This award is an acknowledgement by the industry for our administrators who are always committed towards the development and enhancement of leadership skills while doing our level best in administering our organizations,” he adds.

Tn. Hj. Mir Azrul has been appointed as the Director of the Centre for Foundation Studies (CFS), IIUM since year 2018. He led the team to move in and run the new IIUM Campus in Gambang, Pahang after several years of delays due to several factors. The new campus now gathers more than 3000 students and almost 400 academic and administrative staff members. Together with the new IIUM Management led by its Rector, Tan Sri Dzulkifli Abdul Razak and the Dean of CFS, they had embarked on the IIUM Gambang Green Campus Project under the Sustainable Development Goals (SDG) initiative. Tn. Hj. Mir Azrul was also appointed as the leading facilitator for the said project by the University.

Prior to joining CFS, Mir Azrul was the Special Officer to the former President of IIUM, Tan Sri. Dr. Rais Yatim. He also served as Senior Private Secretary to the former Adviser to the Government of Malaysia on Sosio-Cultural Matters in year 2016. Outside of his official appointment, Tn. Hj. Mir Azrul actively involved in non-government organizations (NGOs) activities. He was one of the trustees of Yayasan Ikatan Rakyat Malaysia-Indonesia (YIRMI) for three years (2016-2018) and also actively involved in community services under Yayasan Budi since 2017. He is also one of the Editorial Board for the Budi (Virtue) bulletin that is issued to the public on quarterly basis which aims to improve and inculcate high culture among Malaysians. Recently, his article on Change Management was also published in the International Journal of Business, Management and Innovation (IJBMI).

Tn. Hj. Mir Azrul believes in sharing of knowledge learning based. He also believes in Make A Difference (M.A.D) approach. He receives a number of invitations to conduct human resource and administration trainings. He is regularly invited as panel of recruitment interviews, grievance committee, training facilitators and various other committees. Despite of his busy schedule, he is currently pursuing his post-graduate study in Universiti Sultan Azlan Shah (USAS) and expected to graduate next year (2020).