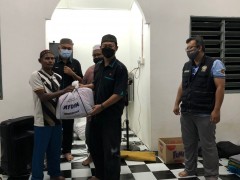 Picture 1: Distribution of prayer mat to the Imam of Masjid KOA Sg Mas

The program starts at 6.30 pm with a short tazkirah By Br Taifunisyam Taib, Deputy Dean, Student and Community Engagement. It follows with salawat session by Ustaz Nazri from LMD. The maghrib session was led by Br. Syamiel from CFS I-Masjid Team. The program continues with tazkirah led by Ustaz Zahin from LMD and Ustaz Zamakhsyari from QLD. They mentioned about the beauty of the holy month of Ramadhan.

After the Isyak prayers, souvenir was presented to Ustaz Tn Hj. Abu Yazid Muhamad, Imam Masjid KOA Sg Mas and the local community. All participants were given tokens of appreciation and packed dinners. Hopefully the short program will give the indigenous community a brief reminder about the holy month of Ramadhan.

Picture 2: Tazkirah by Ustaz Zahin from LMD and Ustaz Zamakhsyari from QLD

Congratulations to the KOP recipients of FRGS 2022